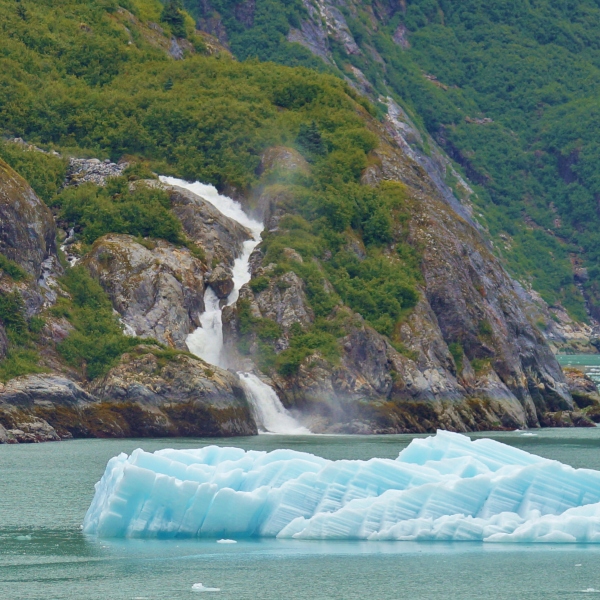 This freezing sensation also rose from within like the realization that she had been formed from an iceberg all along.

Simile – a figure of speech in which two unlike things are explicitly compared. Comparisons and associations are how we help others to see the world from our unique perspectives.

Ralph Cornish, a fellow writer and friend, recently challenged our critique group to write a short piece consisting only of similes. To tackle the challenge, I noted the similes that popped into my head for a day. The next day, I organized my list of similes into a description of morning ritual:

She woke abruptly like the finality of the explosive light bulbs in her house that always need replacing at the same time and don’t sputter out but break suddenly with a loud retort when she hits the light switch. Her fragile grip on sleep had been broken by the sound of the entire house cracking like it had finally stretched “the spot” that released its stiffened spine. She didn’t feel refreshed but wilted like the flowers she left in the vase on the breakfast table because she didn’t want them to be dead. Restful sleep continued to be torturously out of reach like whispers of urgent news too quiet to comprehend. The room smelled sweet as syrup and the air felt as thick. As she dressed, the pulled muscle in her back worried her like an alligator’s jaw ready to snap. This morning, she made her coffee strong as a ranch hand and bitter as a dreamless atheist. She liked it black as Ape Cave and hot as the sulfur smelling mud pots of Yellowstone, so it felt like molten lava pouring down her throat and pooling in her middle. Sitting at the breakfast table, she smelled the rotting flowers and felt a sudden change in the room as if someone shoved ice down the back of her shirt. Her skin pricked like she had fallen into a nest of fire ants, like she had leapt into the still winter lake fed by dripping glaciers in the first heat of spring. This freezing sensation also rose from within like the realization that she had been formed from an iceberg all along. Then her lava coffee warmed her and she sighed like a steam train after it settled into the station releasing the concocted vapors and set pen to paper.

Completely over the top? You know it, but I had so much fun writing it, I wanted to continue exploring and writing similes.

So how do we create similes that are unique and stay away from cliches? One way is to write what you know. Draw from personal experiences and the things that make you different. For instance, if you love chess or have horses you might come up with:

She kept her hand on him as she walked behind him like she would with a horse. She had a feeling he kicked.

As she brushed her fingers through his sweat-matted hair, dust flew into the light like she was brushing a horse after a ride.

I lived in New Orleans so I relate things to alligators and fire ants but now live near a sleeping volcano which makes me think of molten lava and glaciers. I studied psychology which would explain a simile in my work in progress –

She felt all of these recent slights tapping at her rage button like a pigeon in an experiment desperate for a seed.

Speaking of my work in progress, I went to the find function in Word, typed “like a” and found two problems. One, there were very few similes and two, many were cliche:

like a veil had been removed from his eyes

his torso and arms were chiseled like an action hero

Now that I’m excited about creative similes and plan to come up with new ones every day as part of my writing warm up, finding places in my manuscript that beg for similes should be organic. However, not finding similes could be a sign that I need to provide more sensory information. Tastes, smells and textures are difficult to describe without using simile: She tasted like chewing tobacco and pixie-sticks; she discovered a spot behind his ear that smelled like lavender and cucumbers drizzled with a salty musk; His trimmed beard defined his jaw, but painfully pierced her face like needles and pins fused to porcupine quills. Thus, I think a good place for me to start is with finding places to add sensory detail to my manuscript.

And how will I deal with my cliches? Well, I will need to get more creative. Let’s see what we can do with the examples above:

“like a veil had been removed from his eyes”- What else clears cloudy vision?

like he had all the Visine in the world

“be treated like a queen”- How are queens treated? Everything I think about how a queen is described is a cliche, so this one’s tough.

your heels will never blister

“his torso and arms were chiseled like an action hero” – What is another way to describe well defined muscles?

like the peaks and valleys of the Rocky Mountains

his muscles were large enough to house hobbits

Please write your suggestions in the comments. I can’t wait to read how you would deal with these pesky cliches.

I was inspired by this simile challenge, so to continue it and share it with others, I’ve started posting daily Tweets with #similes. Please join me in creating and sharing creative similes.

One thought on “Creative Similes: The Essence of Your Unique Voice”