Today’s dVerse poets prompt is a fun one. The challenge is to pick a line from two books then start your poem with one and end with the other. I just so happen to be reading  Rum Punch: A Novel

by Elmore Leonard and Razor Girl: A novel

by Carl Hiaasen. The first is set in Miami and the other in Key West. That should make for an interesting bridge. 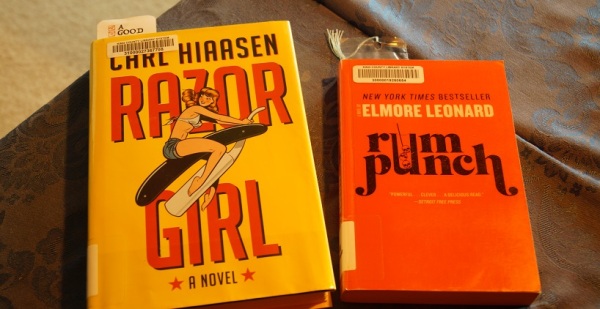 Always On The Grift

Sheepishly she displayed the razor
as she lowered her skirt

Flashing her wide whites and woollies
innocent as a lamb while

Hiding her black sheep, freshly shorn,
back into the fold

But he keeps visualizing
a fresh, pink clam

The wolf in sheep’s clothing
so well disguised

He follows her bleating
until he is fleeced

No apology or acting sheepish
about it, wanting to explain

She re-opens the straight blade
Just like that, back in the game

The first line, “Sheepishly she displayed the razor as she lowered her skirt,” was taken directly from Razor Girl: A novel

by Carl Hiaasen (pg. 43) and the lines, “No apology or acting sheepish about it, wanting to explain” and “Just like that, back in the game,” were taken from Rum Punch: A Novel

by Elmore Leonard (pgs. 143 and 144). I chose these lines to create my bridge because I found it interesting that two different authors in books separated by twenty-four years would choose “sheepish” to describe women who were committing crimes and in acts of deception.