He went down the slide.
He slid. He zipped. He whooshed!

In my last post, I shared an amazing discovery, a  little book full of helpful tips called The Curious Case of the Misplaced Modifier by Bonnie Trenga. At the end of exploring Chapter Seven, you’ll recall I encountered a “there was” problem in my manuscript. After my battle with “there was”, I moved on to Chapter Four: The Delicious Drama of the Weak Verb. Finding specific verbs is important, interesting and sometimes fun, but I didn’t find it delicious.

“Weak verbs are everyday, normal verbs we use all the time. However, they’re often repetitive, passive, wordy, or too general. These verbs frequently fail to clarify the action, and they make readers work too hard.”

Which verb does she start with? You guessed it, our friend “to be”. Along with the battle of “there was” that we discussed last time, she also mentions “it was” and “this was”. Because “there was” introduced me to my worrying workload of weak writing, I won’t linger on “to be”, but introduce you to the other worrying weak verbs and how I began to weed them out. 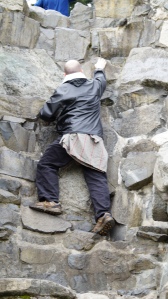 He got up the rock wall.
He climbed. He hauled himself up. He tested his upper body strength.

As the title of this post suggests, other weak verbs include: to do, to get, to go, to have and to make (Trenga also suggests to occur and to use). Because my manuscript is written in past tense, I started my search for the past tense of each verb: did, got, went, had and made. When I typed “did” into the find bar in Word an astounding, heart-breaking 826 instances came back. However, a friend and fellow writer, Sherri Ann DeLost offered a very helpful tip: when typing a word into find type a space before and after it, so the results only include the word not the letters within another word (such as candid). This made a large difference bringing my did count down to a reasonable 180 or so (though many “didn’t”s may still need to be dealt with).

After seeing the staggering number of verbs in need of more specific replacements, I decided I needed lists of specific action verbs at the ready. I started with my thesaurus and found some replacements.

These are only a few examples of the words I found, but I didn’t feel like I had enough replacement verbs, so I searched online. I printed out these three lists:

and here are some other lists you may find useful:

I created a key: D=did, H=had, W=went, G=got and M=made and scoured my lists, writing the correlating letter or letters next to the strong verb that could replace the weak verb.

With all of these active, descriptive, precise verbs at the ready, was I prepared to attack my weak verbs? Some of them.

Here’s an example from my work in progress with the verb “got”:

“Ben grabbed a handsaw and got up on the step ladder while Anna attempted to twist the branch and tug at it to help it along.”

Ben grabbed a handsaw and climbed the step ladder while Anna attempted to twist the branch and coax it along.

I found stronger replacements for hundreds of  weak verbs, but I also found new issues. Many of these weak verbs were like parasites in symbiotic relationship with other words to create a different meaning than the replacement verbs I so obsessively collected. Example:

“Went back” led me to find as many words as I could for returned.

“Had to” led to must, needed, and wanted.

After I worked through each of the weak verbs, examining my sentences over and over again, I thought it would be fun to do a new word cloud of my manuscript to see if this exercise had changed my overused words. I was sure changing so many “went back”s would get “back” off of my list at least. If you haven’t read my earlier post about overused words, you can make your word cloud here. Sadly, “back” was still there, but more shocking was “make”. Hadn’t I just spent an entire day replacing make?

The answer was no. I had focused on the past tense of the weak verbs and, like “there was”, led to “there is”, and “there were”, I needed to search for each of the other weak verbs in all of their variations.

“Make” presents interesting challenges: “Make any sense”, “Make sure”, “Make it look like”, “Make this work”. At least one or two “make sure”s can become “ensure”. I would greatly appreciate other suggestions.

As you can see, verb choice presents unending challenges and sparks the neurons.

This week I will be reading my entire novel for content: plot, action, consistency, etc. I will also pay close attention to whether my verb choices have changed the distinctive voices of my characters. I tried to keep that in mind as I made changes, but I’ll only know for sure after I’ve looked at the big picture. Wish me luck.

12 thoughts on “Part Two The Worrying Wave of Weak Verbs: a cautionary tale of the murderous search for to be, to have, to do, to get, to go and to make”