After losing most of his friends and allies on his harrowing journey of discovery, the star in his pocket finally led him to the mermaids’ dimensional portal pool. They allowed him to capture their magic song, but warned him he could only return home with one of his rewards. He had to choose between fire to heat and light his whole village, the guiding star he carried in his pocket, or the mermaids’ magic song which he knew was the goal of his quest to save the world though he didn’t know what it did or how to use it. The hero never returned home.

This reading for Return With The Elixir feels appropriate for the day. 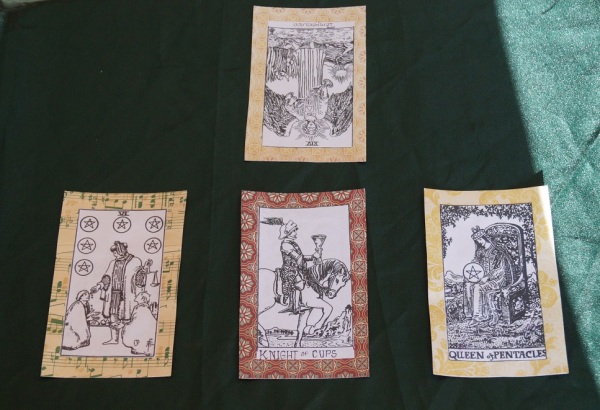 As I shuffled, Temperance upside-down came out and felt like it wanted to be part of this reading, so I put it over the Return With The Elixir Card. Temperance reversed can mean not learning from lessons and experiences that come your way. An interesting card to come up at this point.

Return With The Elixir: Knight of Cups-  loyalty to family and deep relationships

Moment in The Sun: Six of Pentacle- success and achievement through willing to take a risk, being committed, trusting one’s own intuition and using clear communication.

New Problem That Arises: Queen of Pentacles- The Queen of Pentacles represents prosperity and security. She suggests that you have worked hard to generate a level of financial or physical security which, in turn, gives you the ability to be generous with others and to share your wealth and prosperity with those you love. You have used your financial prosperity to build a comfortable home environment and you are focused on investing in your family, as well as your personal wealth. – from biddytarot.com

My interpretation: My MC’s elixir is what he learns from his experience and a change of heart. He learns that what he believed was showing love- hard work to provide for physical needs like food, clothing and shelter, and showing strength- were perceived as being uncaring and aloof. His elixir, therefore, is learning how to form deep relationships with the people he loves. His moment in the sun is when he finds that the risks he has taken through his adventure have paid off. I think the new problem card refers to the body count in my story. My MC will find that his deeper relationships will include consoling loved ones through grief and providing more physical and emotional support than he did before. Though he has a new outlook, he will still find this challenging.

For today’s prompt, write an abundant poem. There are so many instances of abundance in the world: Abundant sunshine; abundant happiness; abundant evil; and in November, abundant poetry!

Abundance is relative
For the creative, a ton of ideas
For the organized, a hoard of containers
For the scientific, hypotheses and data
For the handy, new useful tools
For the curious, exciting questions
For the social, friends

from A Writer’s Reference

A restrictive element defines or limits the meaning of a nouns or pronoun and is therefore essential to the meaning of the sentence. Example: For camp the children needed clothes that were washable.

In this example, if you removed the restrictive element that were washable, it would change the meaning of the sentence.

A nonrestrictive element describes a noun or pronoun whose meaning has already been clearly defined or limited. Example: For camp the children needed sturdy shoes, which were expensive.

In this example, if you removed the nonrestrictive element which were expensive, it would not change the meaning of the sentence.

Spend some time writing sentences with restrictive and nonrestrictive elements. Try to identify examples of both while you read.

Give Thanks for your fabulous story. Enjoy your words.

Focus on the senses. Note down the smells, tastes sounds and textures throughout the day. Try to come up with many different ways to describe each smell, taste, texture and sound.

for those who are sluggish due to consumption of tryptophan. 🙂