I know what you’re thinking. Why is that a silly ornament? It’s a pretty angel. A nice silver ornament. But take a closer look. What’s she wearing that hat for? Is she going on safari? And what is she doing? Smashing some vines into a crescent moon? And what’s going on with her neck on the back there? And with the robe hanging down, that back is hilarious. It looks like a swan stuck in a tablecloth trying to fly through the letter O.

Stacy’s prom took an odd turn when a swan, the opposing team’s stolen mascot, got loose and during its chaotic attempt to escape became entangled in the buffet table’s skirting. After pulling the snacks and punch bowl smashing to the ground, it flew through the large letter O of the Ooh La La lettering of the photo-booth. The motion-censored camera took a series of haunting photos of an angel that night–blurred by the light of her aura, of course–that made the rounds on the internet. At least if was a prom to remember.

Today’s prompt is from the PAD Chapbook Challenge Day 23

For today’s prompt, write a preface poem. A preface is a super literary term as the term typically relates to books–usually as the opening statement or introductory remarks of a book. So I’m mildly surprised I haven’t used this prompt previously. However, I think it’s perfect for the chapbook challenge, because poets who are writing to a theme have an opportunity to write a poetic preface. Of course, stand alone preface poems are just as interesting.

I decided on my theme for my Chapbook last night, so I thought I’d tackle the preface poem today.

In his ordinary world
Vines cover the arbor around the garden gate
He finds security in laboring from early to late
He is practical and thrifty, on the minimal he’ll skate
Thus never in a state of want

Through sacrifice, survival
The enemies of his unknown enemies now friends
His lawn strewn with blood of lives lost to foul ends
The truth here set free forges time for amends
The physical pain will subside

The healing waters flow
He has a new appreciation for other people’s trouble
No longer caught up in his perfect-life bubble
He feels new love; it burst through the rubble
Nothing can be the same

The Character Voice Journal– Write stream-of-consciousness in the voice of your character. Mr. Bell suggests these questions to have your character talk about:

To continue this practice, there are three questions to ask your character in the Ask Your Character section of each of the Experience Writing daily posts in November. 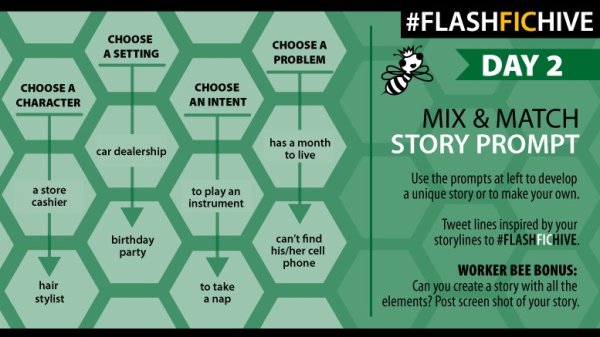 Looking at these options, I still needed some inspiration. I rolled my Story Cubes 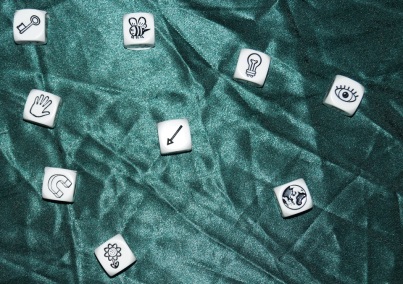 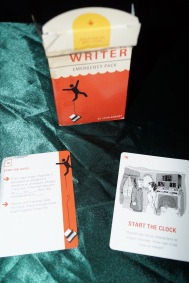 And picked a card from my Writer Emergency Pack

and I chose a couple of Oblique Strategies (Creativity ideas from Brian Eno and Peter Schmidt): 1. Infinitesimal gradations 2. Decorate, decorate.

So what have I got for a flash fiction story idea?

The cashier from the dollar store promises to get the decorations and plastic instruments to her hair-dresser girlfriend’s house in time for her son’s birthday party. The clock is ticking and she has to get across town. As she’s locking up, she waves to the man staring at her from the car lot across the street. He comes right at her as if drawn like a magnet and picks the flowers out of the bank along the sidewalk and gives them to her. He tells her he has admired her from afar for almost a year. Yesterday, he found out he only has a month to live and he wants to know if she will go to dinner with him to bring some joy to his final days. She feels like she has been thrown into a game of Scruples. Does she tell him the truth, that she is attracted to women and in a loving relationship, or does she bring some joy to a dying man by spending a little time with him. What could it hurt? But there is a bee in the flowers and when she politely says thank you and goes to smell them, the bee stings her right in the eye. She thinks it’s the end of the world because she is allergic and she’s going to miss the birthday party. But the man, knowing she’s allergic to bees because he watches her every day and has made it his hobby to know everything about her, has an epinephrine auto-injector and stabs her right in the leg.

by James Scott Bell, he recommends taking notes while you read. After you’ve read the book for pleasure and thought about it, got back and make index cards for each scene. Number the cards, give the setting, what the scene is about, and what, if anything, makes you want to read on. This exercise helps burn plot and structure into your mind.

He also recommends recording your observations. Jotting down any technique you appreciate or insight you have while you read. When you see a technique, or find one in a writing book, practice it. Incorporate it into your own writing.

If you’re interested in using this technique of reading to improve your writing, grab a copy of my study guide-Read to Write: Conflict and Suspense.

What book are you reading today?