I enjoy the prompts at dVerse poets pub. They are often timely for my poetry needs and today is no exception. Today’s prompt is some stream of consciousness. Warning: I learned something today that cannot be unlearned. 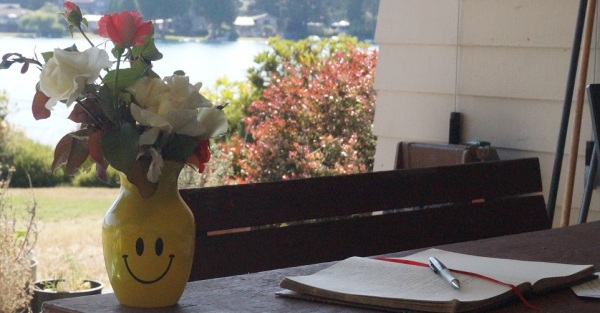 Look at the happy face. Bleed from the thorn. Anything to not look up. And that old bug spray smells so bad. I’m probably dying from more than mud dauber wasp nest shock.

This is my consciousness now

I did this. Now I will never be the same me. I will never sit at my old picnic table on the old porch under that light fixture and write the same way again. I watched the huge wasp or hornet, was it a murder hornet? I grabbed my camera. It flew back and forth from the light fixture over my head here on the porch, where I write, to keep active, to keep cool. The hornet flew back over my head, threatening in its hugeness, in its possible murdery newness. I wanted a picture of its crazy transformers bumblebee face, but I wanted it to go away. I would need a ladder to get its face when it was on top of my porch light.

When it flew again, I walked to the other side and saw, a nest. A grey, papery-looking nest. It came back. I put down the camera and went back in the house, to the shop, to the broomless, metal broom-handle that I had always known had a purpose. Back on the porch, I watched the hornet-wasp fly away and jabbed at that nest, only fearing more bee-like horrors, but my imagination got a full on sting because what came out of that little gray bungalow was a mass of petrified spiders and one large, white maggot-looking larva. I was so confused. Nothing was right. Bees make bees, not spiders. Wasps make wasps, not big, orange spiders with curled legs.

As I whirled, the big  murdery hornet, came back to the top of the light-fixture, its now ruined nest, grabbed a spider, took it to my herb planter, next to my rosemary and thyme, and ate the spider. I watched a wasp eat a spider and I’m not okay. I run into the shop again looking for the horrible bug spray in the green can. The horrible one that might contain DDT or something because my dad pulled it from my great-uncle’s garage. I felt like the moment needed that response. I finally found the can in the cupboard, in the kitchen. The monster was still flying to the non-existent nest. I tried to spray. The can hissed but barely made droplets. I moved around shaking the can, I knew I hated this, but what choice did I have? This was my space and it’s covered in vampired spiders, I sprayed again. It smelled so bad. Like toxic death for everyone.

My mom was giving directions to Dad along the 101 when I called to share nature’s grotesque horrors, after I had read all of the responses to my queries on the internet. She had never heard of the mud dauber, but wanted to make sure I had killed that larva. I admitted my response to spiders falling from my sky was not logical or observational and I assumed that the larva died as I swept all of the spiders away from me with a metal-brushed broom, but to tell the truth, that was a fat maggot that probably wandered off before I had gotten one second of sanity away from zombie spiders. One white worm in a field of dead, or undead spiders is just a worm until you do your research and find out it’s The Worm.