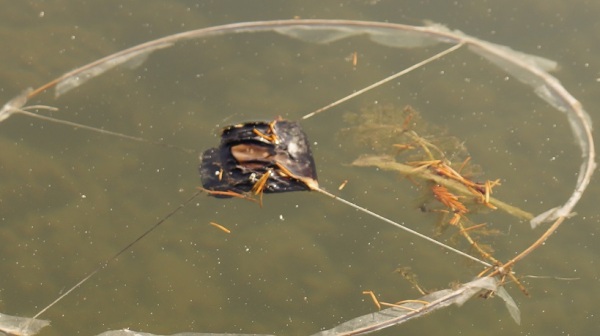 Continuing yesterday’s exploration of things that make me say, “What is that and what is it for?” I’m going to go with part of a lampshade? There’s gotta be a story as to why it’s in the lake, right? I hadn’t thought much about stagnant water on my abandoned property, but in this area, I can picture this image somewhere on the property in a low-lying area.

My protagonist definitely wants to refuse his call to adventure. How will he try to wriggle his way out of a request from the police?

He squinted, trying to cut through the haze. Movement caught his attention. A dark figure, growing larger, coming right at him, burst through the fog.

Think of your favorite scene from any movie or TV show. What makes it so great? Try to incorporate its strengths into a scene you write today.

This is a tough one for me. I’m not one of those people that has a favorite scene and memorizes it or anything. Hopefully something will come to me as I do my morning pages.

I took a look at Hot Fuzz and realized that the scenes I like the most are because of interesting edits and sound choices. I’ll be thinking about how I can use quick cuts, or stylized breaks to make my scenes more exciting.

Have your MC write his or her will or manifesto.

I think my antagonist would have some sort of manifesto, but my MC? Maybe when his mom died, he decided to write a will. I’ll play around with that.

Kirk hadn’t remembered a well on the property.  He pulled back the heavy, fir wood lid. Warm air rushed his face with an eldritch wail.

How they acquired the deed was never explained.

He could see now why they never built here. They only put things on top of this uninviting land.

She continued to stare directly into his eyes without blinking until he felt like he owed her something.

They earned it. They all did for taking away her boys.

He grouped the wrappers by color and only burned like colors at the same time. He imagined it made for less pollution from the smoke.  When he saw a rainbow, he thought that was because of his attention to detail.

It was never litigated in the courts because no one ever responded to the notices. No one bothered to even find out if the owners were still alive.

The art he had produced would have disgusted his parents, though as they aged they had probably discovered legal pharmaceuticals to add to their concoctions.

He had noticed the dung heaps upon his first visit, but had dismissed them as part of an abandoned property overtaken by nature. This, however, smelled fresh and was shaped like a cross. Kirk meant church, and because his Mom was always yelling random scripture about damnation, when he was younger mean kids called him church boy. Could this be a coincidence, his imagination?

Write a page full of two word sentences. Try to convey as much information as possible with only two words by using specific nouns and strong, active verbs.

I really like this challenge. One of my goals for this draft is to use very specific nouns and verbs. I wrote a short story last year that was about an ornithologist and used specific names of birds, including the Latin names, to describe his world.

Since this novel takes place in Pierce County, WA, I want to use specific plant, flower and tree nouns that are in the area.  I also want to use specific anatomy nouns, specific tool and machinery nouns. A cat can be a Siamese or a Persian, a hat can be a beret to a fedora. So let’s see how I can use this to create interesting two word sentences that I can put in today’s scenes.

This is a great exercise. I could do this for hours. Short, precise sentences can help with pacing and emotion. The ones with my character’s names are the easiest to come up with, but I’m also enjoying the others. I think I’ll have some fun with my dictionary and other reference books.

The refusal card: Wheel of Fortune
MC’s biggest fear about the Call to Adventure: Seven of coins
The responsibilities that can’t be abandoned. It is why he can’t refuse: Temperance

My interpretation: My MC’s refusal is rooted in his idea that his past was bad and by escaping it, he could change his fortunes. He fears that going back to where he grew up will turn all the good things he’s been able to build back to bad, that people may discover he’s a fraud and though he may be able to claw himself out again, just facing his past would be a big set-back. The reason he can’t refuse in the long run is because he knows he can’t avoid the truth anymore if he wants to find balance in his life he needs to recognize that what he sees as the opposing forces do not need to be at war with him. He will need to tread carefully.

I found the Welcome to Nightvale crawl on the wrimo wiki. I remember enjoying it in the past. I thin I’ll do it today.

Preparing for editing along the way:

Inspired by Pat Verducci’s post Break Your Story- Index Card Style, I decided on how to color-code my scene cards. They are now color-coded by Story arc.

Blue: Main story line of my main character and his family present and past.

Red: My detective as she is working on the case.

Yellow: My detective’s distractions in her personal life

Green: Other (& red herrings)- so far I used this for the opening scene because it establishes the setting, and the inciting incident, but the MC isn’t in the story yet.

Now that I’ve got my color-coding, I started my Story Grid using the same colors for the rows. I was very excited when I started doing this today. It feels good to be organized this year.

Yesterday, after I finished my words, I thought I would head over to Master Class and watch some thriller writer videos while I worked on December’s planner pages. When I got there I was happily surprised to see that Danny Elfman has a Master Class. I was so excited that I started wandering around looking for the promo link to share it with everyone. While I was unsuccessfully doing that, I found that Master Class has created a NaNoWriMo Group. If you’re already enjoying classes on Master Class, you can cheer on other NaNo writers while you’re there. If you haven’t joined Master Class yet, I highly recommend it. It’s worth it for the Neil Gaiman class alone, but there are so many great classes to enjoy.

I hope you find some inspiration in these exercises. See you tomorrow.