Happy Veteran’s Day. It is a nice coincidence that our theme today, for The Hero’s Journey, is: Tests, Allies and Enemies. To observe the day, I took the time to read “Please Don’t Thank Me For My Service”, a piece from the New York Times that interviews veterans. I recommend reading  it. It’s a meaningful piece that’ll get you thinking.

Even if your story has nothing to do with war or the military, the conflicts between countries are based on the same conflicts in all relationships. Your main character may face territorial, economic and ideological conflicts and will need allies and make enemies (or just people who get in her way or don’t like him).

You may want to take a look at the news and think about the motivations behind the conflicts going on in the world today. How might they relate to your story? Think about the veterans in your family and community. What conflict were they involved in? Who were their enemies and allies?

In side the earth

She thought Andy loved her until he dragged her through Ape cave. At one point she was ready to give up and die in there. When they finally emerged, Sarah startled a family of skunks. Andy was never heard from again.

Today’s reading, following Mapping the Hero’s Journey With Tarot: 33 Days To Finish Your Book by Arwen Lynch, is a little different. First, you pull three cards: one is the Test card, one is for allies, and one is for enemies. Then you place a card under each of those cards. The one under Test card is the most important thing your MC learns from the test throughout the story. The one under the Allies represents the most important ally in your MC’s world and the card under the enemies shows what motivates his enemies against him. There’s a lot of information to unpack here which is great because I need to do a little extra writing today. 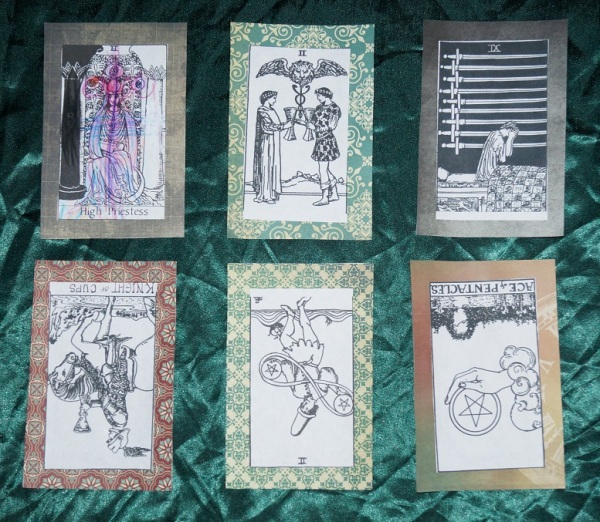 What MC learns: Knight of Cups upside-down- a fight for the heart; reversed

The Allies: Two of Cups- a balanced relationship that is good for both parties

Most important ally: Two of Pentacles upside-down- take on a new task that is a complement  and a diversion; reversed

The Enemies: Nine of Swords- anxiety, keeping him up at night. When fear overwhelms us, we are alone.

Motivates MC’s enemies: Ace of Pentacles upside-down- The beginning of making something through work; reversed

My interpretation: This is a pretty clear reading for my character. My character’s test is to find answers to an odd mystery that he stumbled upon. What he learns from the test is not to lose interest in love once he’s won it, but to continue to fight for it. The test renews his interest in fighting for his relationships. He has good working relationships and his most important ally is someone very like himself that he has known for a long time. His sudden on-slot of enemies, unpredictably reaching into his life, are causing him anxiety and keeping him up at night. These enemies are motivated by finding new ways to create wealth quickly and easily without having to work for it.

The anxiety caused by all the odd characters suddenly harassing my MC is an aspect of the story I haven’t explored yet. I will definitely attempt to incorporate the idea into my writing today. Sounds like a good day to grab my copy of The Emotion Thesaurus: A Writer’s Guide To Character Expression

by Angela Ackerman and Becca Puglisi and turn to Anxiety. I think I’ll look at Anger and Doubt as well.

guisard: n. a person who wears a mask.

Write a monorhyme poem about tests and trials.

Grab a book by an author you would be proud to be compared to; a book that you think has a similar tone to the writing you are working on. Open to a random page and start reading out loud. Write down your favorite words on the page. Does this author use a lot of sentence variety?

Emulate the sentence structures of one paragraph, using your own words.

Something happens that is out of your MC’s control.

Your MC is having a conversation, in person, with two people. One s/he considers an “ally” and one an “enemy”. Write the dialogue.

The Orange is the New Black Word Crawl seems appropriate for today.