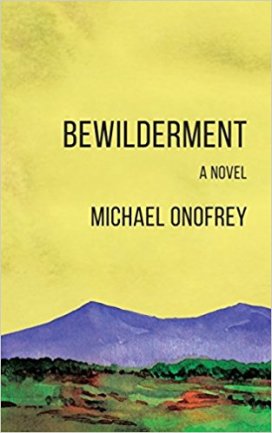 Last September we had a special guest post from Michael Onofrey, an author I met through the Five On The Fifth Magazine‘s authors group. His post, About Writing, let us peek into his writing life. Today, I am happy to announce his novel Bewilderment is available for pre-order on Amazon. It will be officially released on April 17th and I was given a digital copy to review.

MICHAEL ONOFREY was born and raised in Los Angeles. Currently he lives in Japan. Over seventy of his short stories have been published in literary journals and magazines, in print and online, in such places as Cottonwood, The Evansville Review, Natural Bridge, Snowy Egret, Terrain.org, Weber–The Contemporary West, and The William

and Mary Review. Among anthologized work, his stories have appeared in Creativity & Constraint (Wising Up Press, 2014), In New Light (Northern Initiative for Social Action, 2013), Road to Nowhere and Other New Stories from the Southwest (University of New Mexico Press, 2013), and Imagination & Place: An Anthology (Imagination & Place Press, 2009). He is the author of “Bewilderment,” Tailwinds Press.

Reading Bewilderment took me on a true adventure. From an uncomfortable homecoming in Los Angeles to a sweat-soaked bicycle tour of India; from an artist’s studio in Los Angeles to a voyeur’s job in Pakistan; I followed Wade’s life from the most mundane to the most unusual with an even, honest, matter-of-fact account in Wade’s refreshingly open world view.

The feel of the book brings you into the life of a longtime traveler with focus on the most basic human needs: the danger of unclean water; gathering sustenance; finding shelter; a life spent relying on strangers and not building sustained relationships. Mr. Onofrey’s use of these detailed daily needs highlights the contrasts of Wade’s life as a traveler and the life he tries to create back home.

I enjoyed how the structure of the novel also lends to the telling. In the beginning, the chapters alternate between Wade’s life after returning home to care for his sick mother and events during his previous bike tour of India. As the story progresses, the format changes and Wade’s travels become stories he tells to his lover in the present. By the end of the novel the past and present appear to intertwine.

Though I found the detail, format, and crisp conversational language engaging, I often felt kicked out of the story by the present-tense telling. I felt like the story slipped from past tense to present tense in a jarring way. I also noticed a couple of moments when the story head-hops to Wade’s girlfriend which took me from the story, but only for a moment. I think it was part of the honesty of the telling and Wade’s world view, but there were a few times I thought, “That was interesting, but he just dropped it.” However, none of this stopped me from hungrily turning the pages.

Bewilderment is a unique read with a skillfully developed protagonist that pulls you into the life of a traveler and leaves you pondering your own life experiences.

* I received a digital copy of Bewilderment in exchange for a fair and honest review.

Did you like this book review? Any tips to make it better? Would you like to see more book reviews on Experience Writing? Please let me know in the comments.

This morning I have something very exciting to share. I found a wonderful website called A Year of Reading the World. In 2012 Ann Morgan read her way through the countries of the world–196 independent countries and one extra territory–reading one novel from each country. She wrote a book about her experience that comes out in 2015.

Reading her website ignited my wanderlust. I love to travel but I haven’t traveled much in my reading lately. Oh, I’ve been traveling to England a lot, especially in my middle grade fiction reading, but not much else. To be a well-rounded reader and an author with a unique voice, it makes sense to me that I should study novels by authors with very different perspectives from my own.

I was so inspired by Ann’s reading adventure, I already ordered two books from her list to get me started. I’m looking forward to reading The Return of the Water Spirit by Pepetela set in Angola (I  admit I chose this one for the title because I’ve been writing stories about a lake spirit) and Hurramabad by Andrei Volos.

Here’s to broadening our horizons!

Have you found any great book lists like Ann’s?

Have you read any great books by authors from a country in Asia, South America, or Africa (or a country you had never heard of before) that expanded your mind?