This image, as my title suggests, made me think of the horror classic The Hills Have Eyes

. It also makes me think of the wonderful faux documentary Troll Hunter

(Season Six episode 21).
How would your character or characters react to coming across a giant eye in a hill, in the ground, in the forest? Or is the hill with an eye your character?

Wanna try your hand at pairing some isms with this eye? Join me over at #pessimisticmoustache.

Today was different. Today, Earth’s eye had opened and she did not enjoy her view. The ground began to quake and the oceans boiled.

Theme: Fighting The Urge To Vomit

The suggested form for this provocative prompt is a storytelling poem. I think this could probably work with our visual prompt. One might feel the urge to vomit when they encounter a disembodied eye in a hill. I really enjoyed the storytelling poem The Croft and Dalton Cats. I’ll use it as inspiration for today’s poem.

The earth quivered with a sigh, when
From the hill emerged an eye, then
It moved to stare at me and
I stood still as a tree.

It moved slowly without sound, when
I felt a signal through the ground, then
I thought I knew its voice and
It said I had a choice.

It warned me of a comet, when
I fought the urge to vomit, then
The eye became the hill and
The wind tickled wild dill.

The choice the monster gave, when
It emerged from deep its grave, then
Showed me all life’s fate and
Sunk away to mitigate.

Was to join it in its bed, when
All life on earth was shed, then
Repopulate the earth and
Eternally give birth.

Or watch as the comet comes, when
Life’s destruction total sums, then
Be no more of eternal matter and
I clearly chose the latter.

I am so glad I’m doing #OctPoWriMo. I wasn’t sure how I was going to write a poem with Fighting the Urge to Vomit, but with my #Writober image and the inspiration of Edward the Killer Carney‘s storytelling poem, I came up with something unique and fun. Thank you everyone for all the inspiration! 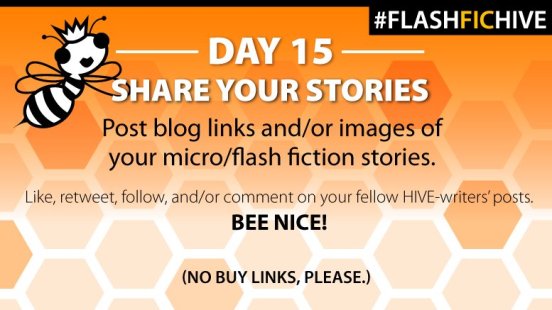 This is a great prompt to get some words out into the world. For those of you that have been reading these #Writober posts, you know I write a #vss very short story for each of the picture prompts. I post most of them on twitter with the hashtag #vss but there are other places to post your #microstories as well.

@CalebEchterling is posting his tweet-long stories at #vss365 with a word prompt. Today’s word appears to be “signal”.

Here are some more you can try:

I hope you’ve found some inspiration for today’s writing.

We’re already half-way to Halloween. Got your costume ready?